It is an online database that provides information on Official Development Assistance (ODA) both in aggregate terms (Global Data) and by project. The data is available both in Portuguese and in English, in €uros and US dollars, for a certain time period.

In the light of the good practices (both national and international) regarding transparency, accountability and communication, of the DAC Main Findings and Recommendations to Portugal and, of the several commitments that Portugal has been undertaking in this field, this new system stands as an important "result” within the progresses made so far.

After a rise in 2010 and 2011, Portuguese ODA started to decrease sharply in 2012. The main reason is the fact that Portugal was under a financial assistance programme until June 2014. Still, 2015 also witnessed a downturn with a decrease of 14% compared with 2014, representing a net value of 279M€. The recovery occurred in 2016, with a growth of 11% over the previous year, which corresponded to a total ODA of 310M€, corresponding to a recovery phase of economic growth in Portugal. In 2017, the growing trend was confirmed with ODA reaching 338M€, stabilizing in 2018 in 329M€. 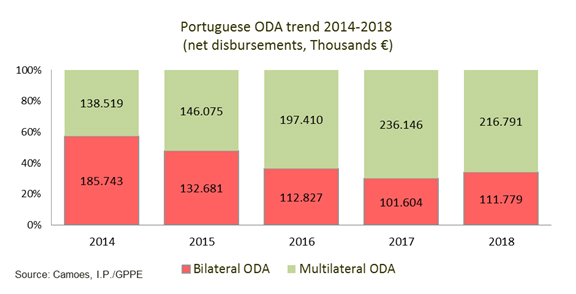 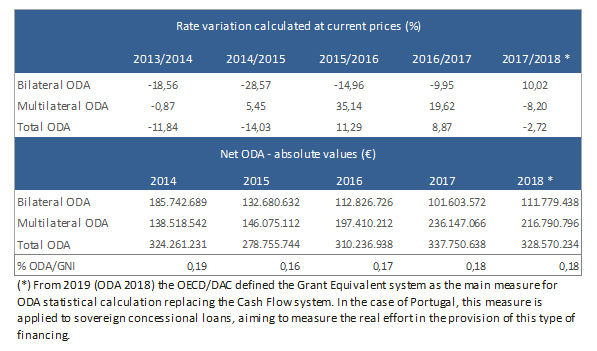 The negative ODA trend since 2012 can be explained by the general reduction of Portugal’s total financial flows (due to budgetary restraints) and by the repayment of Angola’s debt to Portugal, which began in 2009. The lower use of concessional credit lines/loans by the partner countries, as they were in the final stage of disbursement, contributed to the negative variation since 2015.

Portuguese bilateral ODA, on average, represents 41% of total ODA confirming on a strong geographical concentration in Portuguese-speaking African countries (PALOP) and in Timor Leste, while multilateral ODA is at 59%, being mainly allocated to EU institutions, the World Bank Group (mostly in 2017) and the United Nations. 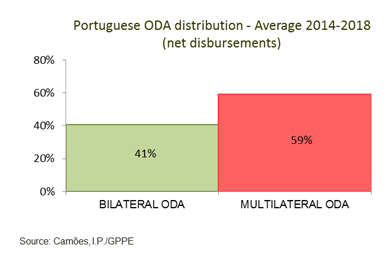 The ODA/GNI ratio stood at 0,18% in 2018, representing a slight growth compared with 2015 (0,16%) and 2016 (0,17%). The decrease of the previous four years reflected the effects of the economic and financial adjustment programme which Portugal was subjected to, as well as scarcer use of concessional lines of credit/loans available to partner countries. The recording of an ODA/GNI ratio of 0,18% in a year marked by economic growth, which is reflected in a higher GNI, represents an additional effort to rise Portuguese ODA. In 2018, in the grant equivalent system, the ratio was 0.18%, equal to the recorded in the cash flow system. 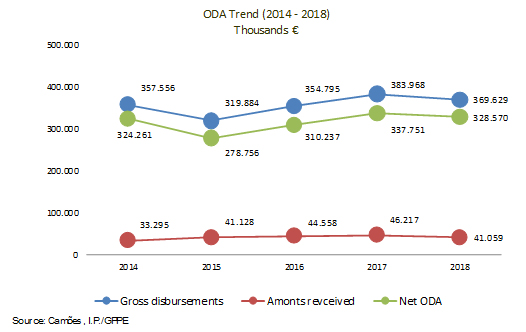 In 2018, ODA of all DAC/OECD member countries totalled USD 153.0 billion (preliminary data in grant equivalent) at current prices. Portugal ranked 23rd in the group of the 29 DAC donor countries.

The Portuguese Bilateral ODA reversed in 2018 its decreasing cycle of recent years, reaching 112M€. A value that represents 34% of the total ODA in that year and a 10% variation compared to 2017, breaking the downline drawn, which was mainly due to Angola’s debt repayment to Portugal, the start of the repayment period of concessional lines of credit/loans by Cabo Verde, as well as the lessening use of concessional lines of credit/loans by the partner countries, such as S. Tome & Principe. In 2018, the main reason for the increase is the inclusion of 7,9M€ - Value corresponding to the ODA eligibility coefficient calculated by SOFID within the scope of the OECD/DAC ODA Eligibility Assessment, necessary to report Private Sector Instruments (PSI) - of SOFID's capitalization reflecting, in that year, the effort made by Portugal in diversifying sources of financing for development.

The distribution of bilateral ODA by type of finance illustrates the downward trend of concessional lines of credit/loans and the stabilization of grants component. In 2015, grants surpassed loans component and two new types of finance (interest subsidy and equity) arose for the first time, with not significant values. The volume of concessional lines of credit/loans, very expressive especially in 2011 and 2012, adopted a decreasing line and, from 2017, started to record negative values. 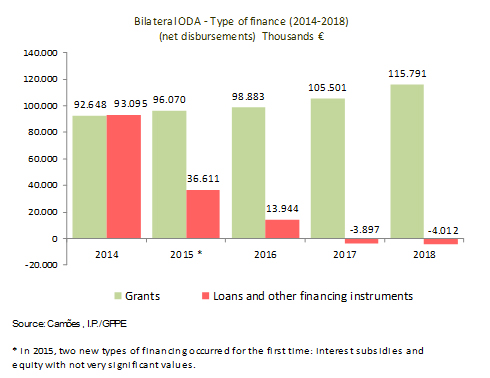 Portuguese ODA is mostly concentrated in PALOP countries and Timor Leste, although in a declining line. This trend was particularly evident in 2010 and 2011 when PALOP countries and Timor Leste jointly received, respectively, 80% and 90% of bilateral ODA, falling to 76% in 2012 and rising again in 2014 (85%)  to decline once more in 2015 (69%). From 2016 to 2018 the Angola’s debt repayment to Portugal, the start of the repayment period of concessional lines of credit/loans by Cabo Verde, as well as the decreasing use of concessional lines of credit/loans by the partner countries, explain the fall to 60% (2016), 56% (2017) and 53% (2018). On the other hand, the growth trend of “Other countries/groups” reflected the policy of geographic diversification of Portuguese ODA. 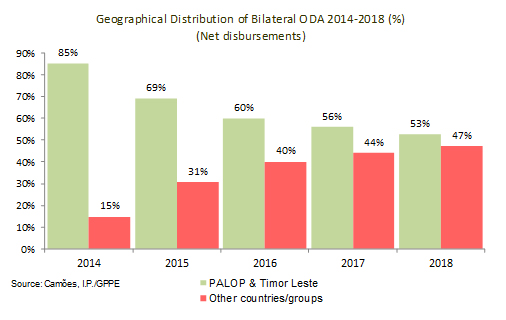 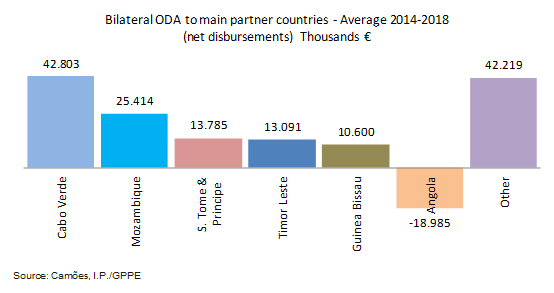 The analysis of the distribution of bilateral ODA gross disbursements (to avoid the distortion introduced by the amounts received) reveals that Cabo Verde and Mozambique were, just like in the previous four years, the main recipients of bilateral aid. In 2018 both received, in gross amounts, 45,7M€ and 18M€, respectively, constituting 40% of the total gross ODA. A significant part of these amounts refers to concessional lines of credit/loans for the construction of facilities and infrastructures and investments in the sectors of renewable energy, the environment, tourism and social housing.

Regarding sectors, the priorities for Portuguese co-operation are based on the following criteria: (1) priorities defined by the national development strategies of partner countries and (2) the added value of Portuguese development co-operation based on Portuguese institutions’ high experience in the areas of education and training, strengthening of the public sector administrative management and good governance.

The sector group Social Infrastructure & Services (education, health, population, reproductive health, water and sanitation, government and civil society, other infrastructures and social services) concentrated on average of 61% of bilateral ODA in the past five years.

Non Sector Allocable Aid, which includes contributions to General Programme Assistance, Actions related to debt, Humanitarian aid and assistance to refugees in donor countries, represented 12%, due to the use of concessionary lines of credit/loans by countries such as Morocco, Cabo Verde, Mozambique, S. Tome & Principe and China, but also in result of the gradual increase in aid to refugees and emergency assistance. 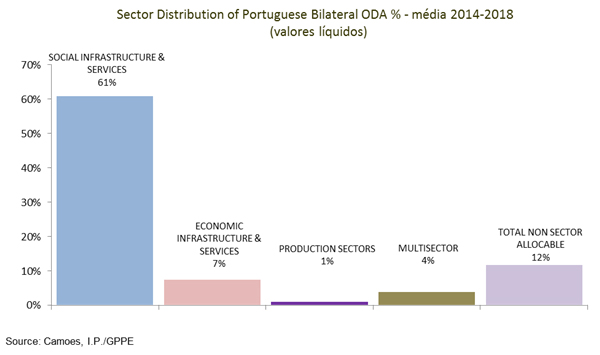 The volume of 2014 and 2015 multilateral ODA confirmed a tendency of stabilization in the last three years. However, 2016 was marked by a notable positive variation in this component that reached 197M€ (146M€ in 2015), explained by the increase in the contribution to the European Commission's Budget for External Aid, as a result of the entry into force, in 2016, of new rules on own resources. In 2017, although less accentuated, the rise in multilateral ODA continued, justified by the extraordinary settlement of arrears to some organizations related to previous years' commitments, thus surpassing the 200M€ barrier (236M€). In 2018, there was a reduction of multilateral ODA (217M€) of 8% compared to the previous year, mainly due to the 2017 exceptionally high values. 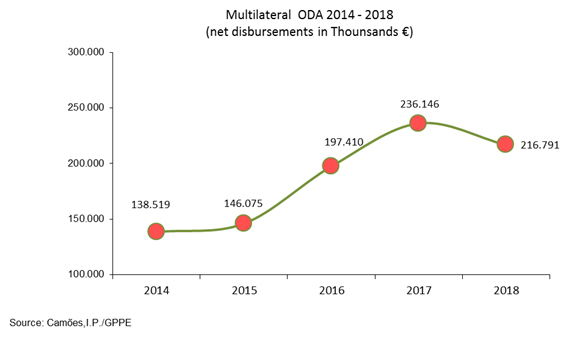 In the 2014-2018 period the majority of Portuguese multilateral aid (81%) is allocated through EU institutions, especially by the contributions to the European Development Fund (EDF) which finances EU assistance for African, Caribbean and Pacific countries (ACP), as well as to the European Commission’s Budget for External Aid to developing countries not covered by the EDF. Contributions to the Regional Development Banks, World Bank and WTO accounted for 14%. UN institutions received, on average, 5% of Portugal’s multilateral ODA. 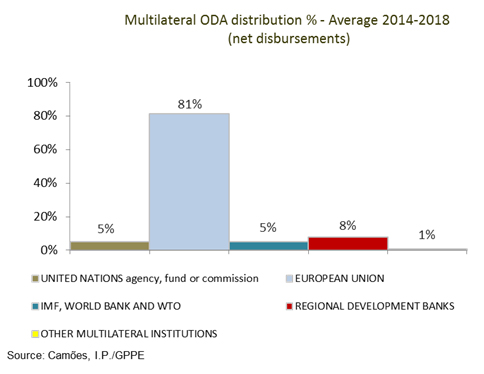