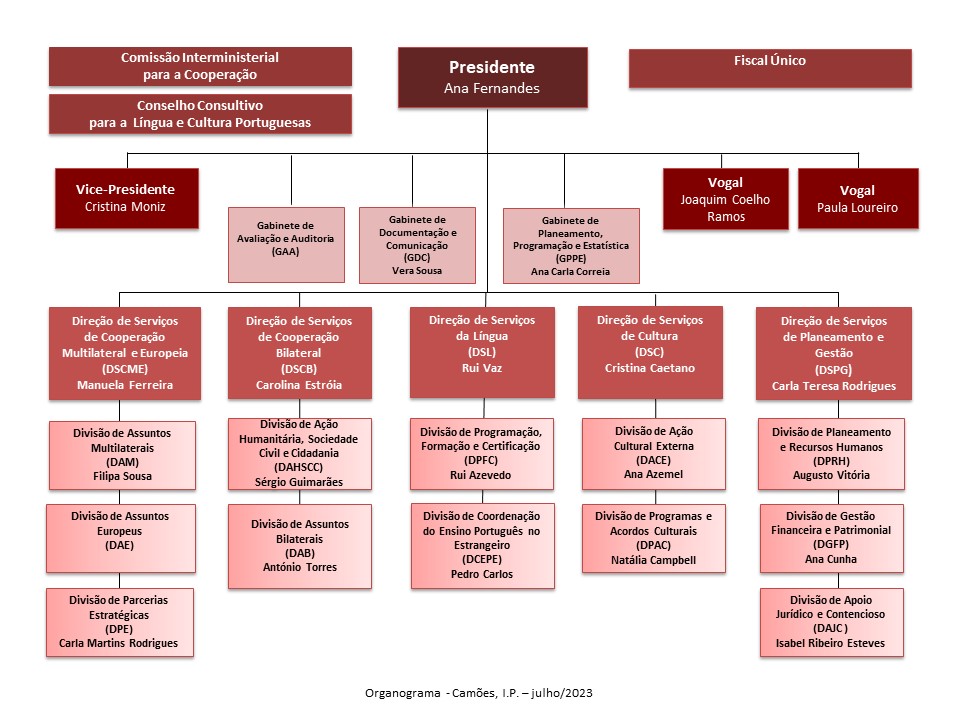 The Camões, I.P. bodies are:

At the highest management level, Camões, I.P. has a board of directors and an auditor (supervisory body).

The board of directors has under its direct jurisdiction three organisational units: the Office of Evaluation and Audit, the Documentation and Communication Office and the Office of Cultural Programmes and Agreements.

At the middle management level, there are three organisational units: Co-operation, Language and Culture, and Planning and Management.

Board of Directors - President

The Board of Directors is composed of a president, a vice-president and two members, the President having the casting vote.

President of the Board

João Manuel Mendes Ribeiro de Almeida was born on December 1, 1962, in Lisbon. He holds a Law degree from the Faculty of Law of the University of Lisbon. Approved in the admission competition for the position of Embassy Attaché in 1989; Embassy Attaché, at the State Department (1990); Assistant at the Office of the Secretary of State for Portuguese Communities Abroad of the 12nd Constitutional Government (1991-1992); Secretary of Embassy (1992); Observer for the European Union at the electoral process of the Republic of South Africa (1994); posted at the Embassy in Athens (1995); First Secretary of Embassy (1998); posted at the Embassy in Zagreb (1999); Diplomatic Advisor to the Minister of Foreign Affairs of Timor-Leste (2001); Consul-General in Benguela (2003); at the Office of the Secretary of State for Foreign Affairs and Cooperation of the XVI Constitutional Government, as Diplomatic Advisor (2004-2005); in the organization of the Ibero-American Ministerial of Guimarães (2005); at the Office of the Minister of State for Foreign Affairs of the 17th Constitutional Government, as Diplomatic Advisor ( 2005-2006); and as Chief of Staff of the same Cabinet (2006); Counsellor of Embassy (2006); at the Mission Structure for the Portuguese Presidency of the Council of the European Union, as Director of Permanent Installations (2006); Head of the Department of Common Foreign and Security Policy, and European Correspondent, at the Directorate-General for Foreign Policy (2007); Consul-General in Barcelona (2011); Minister Plenipotentiary, Second Class (2012); Ambassador to Colombia (2013-2017); simultaneously non-resident Ambassador to the Republic of Ecuador and to the Republic of Costa Rica; Minister Plenipotentiary, First Class (2015(; Ambassador to Argentina (2017-2020); simultaneously non-resident Ambassador to Paraguay.

Board of Directors - Vice-President

Vice-President of the Board 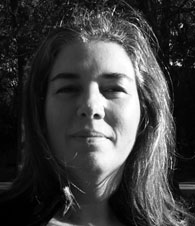 Member of the Board of Directors

Member of the Board of Auditors since January 2018.  In the Ministry of Foreign Affairs since 2001, with a career in public governance, specially focused in budget control, held the position Director for Planning and Budget Control from 2012 until January 2018. Born in Lisboa, holds a degree in Economics and post-graduation in European Studies and in International Relations.

Member of the Board

He has an undergraduate degree in Modern Languages and Literature (Portuguese and English Studies) and a Master degree in Intercultural Relations. He started his teaching career in 1985. He was a Lecturer at the Instituto Camões in Nampula, Mozambique (from 1995 to 2000), and Head of the Coordinating Centres of Portuguese Language of the same Institute (from 2000 to 2002). He was Cultural Attaché of the Portuguese Embassy in Cape Verde and Director of the Portuguese Cultural Centre (from 2003 to 2012). He was Director of the IPOR - Instituto Português do Oriente, in Macau (from 2012 to 2018). He has been a Member of the Board of Directors of Camões – Instituto da Cooperação e da Língua, by Order of the Minister of Foreign Affairs, since 1 September 2018.

Email: This email address is being protected from spambots. You need JavaScript enabled to view it.

Advisor to the Board

The Inter-ministerial Commission for Co-operation (CIC) is a sectorial body for government support in the area of development co-operarion policy, working together with Camões, I.P..

The CIC’s main responsibilities are to:

Advisory Council for the Portuguese Language and Culture

The Advisory Council is the official body for consultation, support and participation in the definition of the general performance of Camões, I.P., meeting at least once a year according to its internal regulations.

The Advisory Council consists of:

The Advisory Council is responsible for: