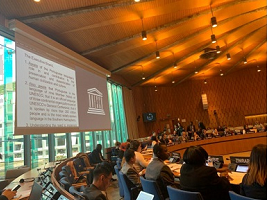 The United Nations Educational, Scientific and Cultural Organization (UNESCO) approved the celebration of the World Day of Portuguese Language on May 5th. The decision was ratified at the UNESCO General Conference on the 25th of November, 2019.

The choice of this day is aligned with the resolution of the Council of Ministers of the Community of Portuguese-Speaking Countries (CPLP) that in 2009 established the same day as the Day of the Portuguese Language and Culture.

The Proclamation of the World Portuguese Language Day aims to “highlight the important role that Portuguese language plays in the preservation and dissemination of human civilization and culture” and recognizes that the language is nowadays spoken by more than 265 million people.

International days are designated by the United Nations General Assembly or its specialized agencies.