Co-operation relations between Portugal and other countries

In addition to the geographical concentration in Portuguese-speaking African Countries (PALOP) and Timor Leste, Portugal develops co-operation activities in other developing countries – hereby referred to as 'Other Countries'. This analysis includes the distribution of ODA to this group of countries, excluding the five PALOP countries, Timor Leste and regional groups.

Between 2015-19, the Portuguese ODA to ‘Other Countries’ corresponded, on average, to 23M€, which is equivalent to 20% of the average bilateral ODA disbursed in that period. In 2019, aid for this group of countries stood at 19,2M€, maintaining the downward trend of the previous year, although to a lesser degree. 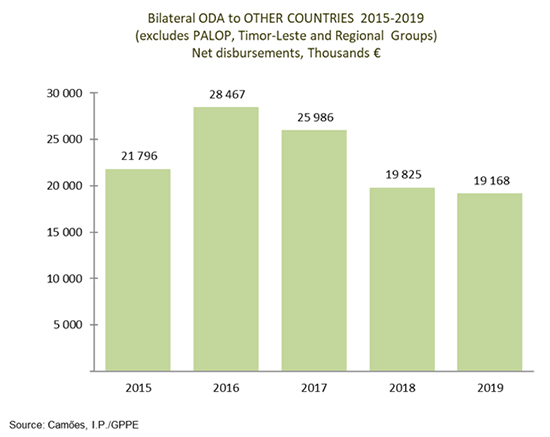 The Asian continent was the main destination of ODA, as a result of China's use of a concessional credit line (until 2017) and projects in Education and Culture sectors with Macau, humanitarian aid to refugees in Syria , and the participation of Portuguese security forces in international peacekeeping missions in Afghanistan.

The presence of Portuguese Cooperation in Africa is extensive and diverse, being active in more than 40 countries in the period 2015-19, excluding the PALOP countries. The policy of extending to other geographies initiated in 2016, reinforced aid in Senegal, Morocco, Tunisia, Central African Republic, South Sudan, Democratic Republic of Congo, Namibia or Côte d'Ivoire, especially in sectors such as Education, Culture, strengthening of Government and Civil Society and Humanitarian Aid.

Central and South America received 18,7% of aid, essentially through cooperation with Brazil, Venezuela, Cuba, Mexico and Argentina (Education and Culture sectors), and Colombia (through participation in the UN Verification Mission of the Ceasefire Agreement in the country, the EU Fund for the Peace Process and the support for Rural Development for the production and marketing of cocoa).

Europe marks a negative average net ODA (-0,33M€) due to the annual repayment of the concessional loan granted to Bosnia-Herzegovina, for the supply of railroad wagons for the transportation of goods. Kosovo (Portuguese participation in peacekeeping missions), and Serbia and Montenegro (Education and Culture) are the main beneficiaries. 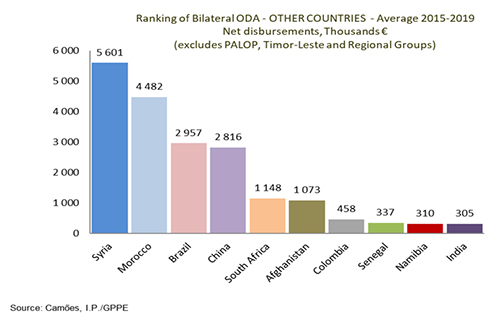