It is an online database that provides information on Official Development Assistance (ODA) both in aggregate terms (Global Data) and by project. The data is available both in Portuguese and in English, in €uros and US dollars, for a certain time period.

In the light of the good practices (both national and international) regarding transparency, accountability and communication, of the DAC Main Findings and Recommendations to Portugal and, of the several commitments that Portugal has been undertaking in this field, this new system stands as an important "result” within the progresses made so far.

Portuguese ODA has been following an upward trend, which will be confirmed in 2021 (370M€). Between 2018 and 2021, the ODA/GNI ratio oscillated between 0.17% and 0.18%, placing Portugal in 23rd place among the 29 DAC donors. In absolute terms, ODA shows an upward trend, with the multilateral component of aid gradually predominating. 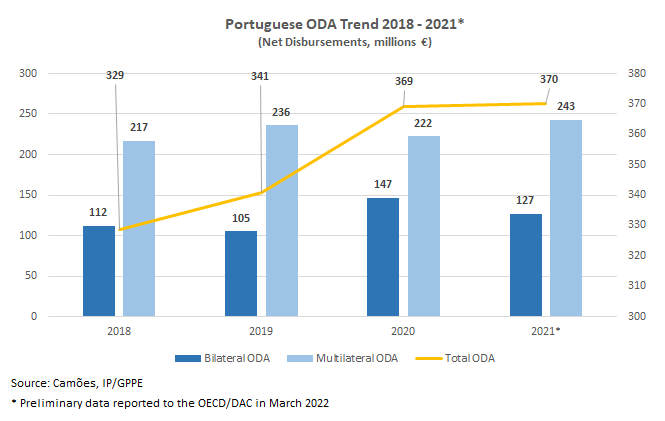 Portuguese bilateral ODA represents, on average, 35% of total ODA, confirming the geographic concentration in the PALOP countries and Timor-Leste, while Multilateral ODA reaches 65% and is mostly directed to the institutions of the European Union (EU), the World Bank Group (WB) and the United Nations (UN). 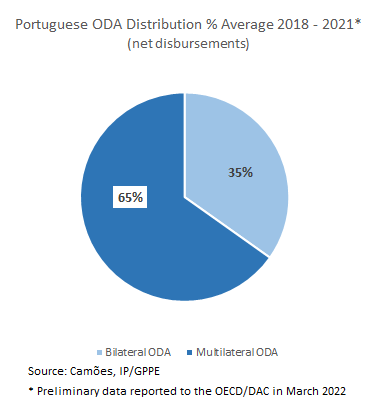 Portuguese bilateral ODA is strongly influenced by concessional credit lines/loans. The variations are due to the degree to which these instruments are used by the partner countries, as well as the reimbursements made. 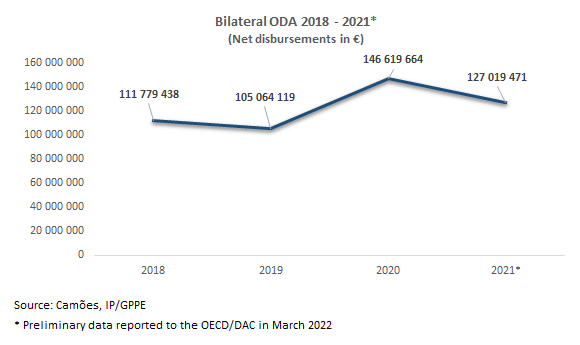 The distribution of Bilateral ODA by type of financing illustrates the downward trend in the credit lines/concessional loans component and the increase in grants. Between 2018 and 2021, the grants component represented 28% of net ODA. 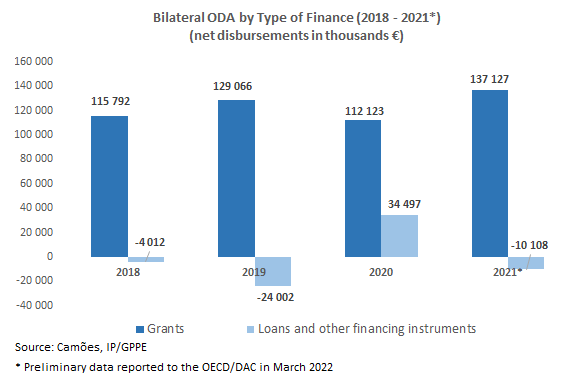 Portuguese ODA has a regular and strong geographic concentration in the PALOP countries and Timor-Leste. This characteristic, which was strongly accentuated in the past (90%), has seen a continuous decrease (average 53%). In contrast, the growth trend in the "Other countries/groupings" set reflects the policy of geographic diversification of Portuguese ODA. 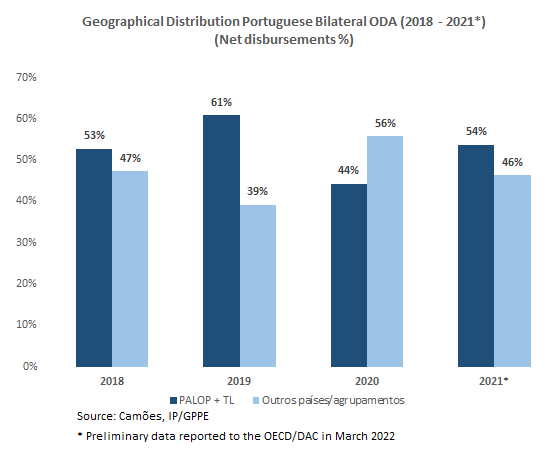 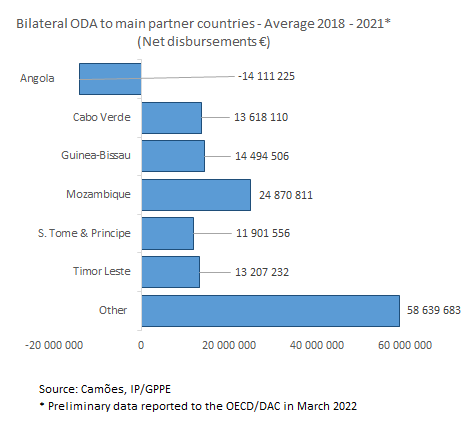 An analysis of the distribution of bilateral ODA in gross values (total disbursements made) shows that Mozambique (51M€) and Cabo Verde (16M€) traditionally remain the main recipients of bilateral aid. A significant part of these amounts relates to credit lines/concessional loans for infrastructure and investments in priority sectors in partner countries. 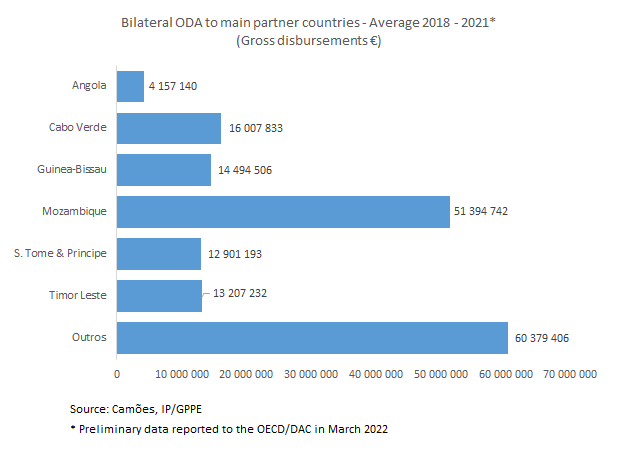 The "Non-Allocable Sectoral" group, which includes general components such as program aid, debt-related actions, humanitarian aid or support for refugees, accounted for 17%, as a result of the use of concessional credit lines/loans by some partner countries, but also due to the gradual increase in support granted for refugees and humanitarian aid.

The "Economic Infrastructure and Services" group (Transport, Communications, Banking and Financial Services) and the "Multisector/Crosscutting" category, which covers projects that benefit several sectors simultaneously and includes environmental protection, rural development, and food security, together made up 7%. 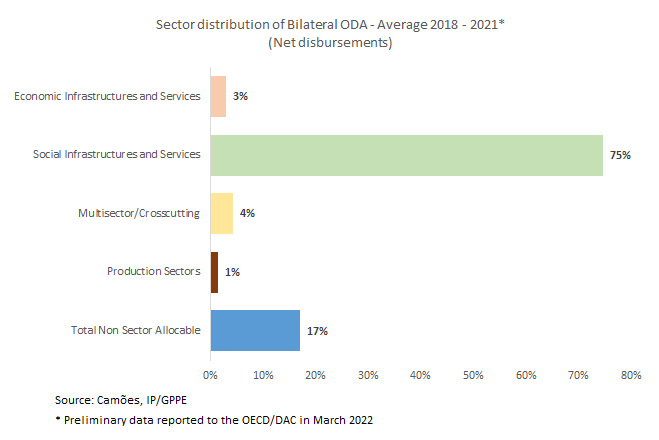 The multilateral component per beneficiary entity registered in 2021, an increase in relation to 2020 in the order of 9%, driven mainly by the increase in the contribution to the European Commission's budget for assistance to developing countries.

Between 2018-2021, 89% was allocated to EU institutions, mainly through the European Development Fund (EDF), which funds EU aid to African, Caribbean and Pacific (ACP) countries, and to the European Commission's budget for developing countries not covered by the EDF. Contributions to the Regional Development Banks, the World Bank and the WTO together comprised 10% of aid. The UN channelled 6% of Portugal's multilateral ODA. 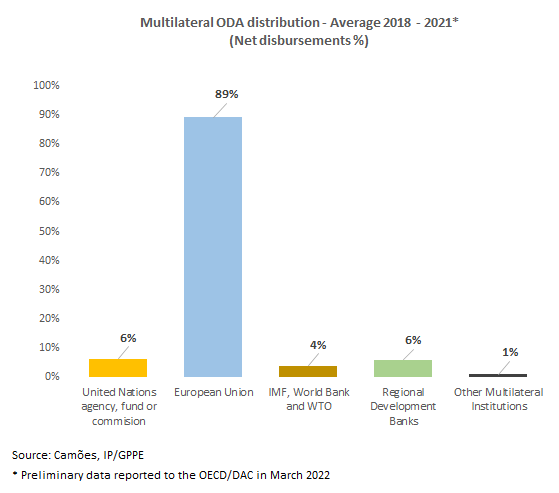