Co-operation relations between Portugal and Timor-Leste. Languages: Tétum and Português (together with local dialects)

Embassy of the Republic of Timor-Leste in Lisbon 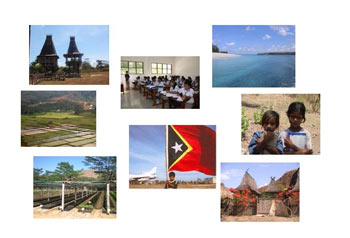 Co-operation relations between Portugal and East Timor began in 1999, resulting from a profound historical relationship between these two countries which is reflected in the areas of intervention defined by the contribution (€470m) that Portugal has provided to East Timor over the past decade. This amount of co-operation aims to not only reduce poverty and improve living conditions for the population, but strengthen the identity of the East Timor people through the language and culture of their country.

As a result of developments in the country, requests made by the East Timor authorities combined with the possibilities offered by Portuguese co-operation resulted in a large amount of emergency humanitarian aid in the initial stages from 1999 to 2002, as well as the appointment of a commissioner to oversee East Timor’s transition. Since 2002, following the restoration of the country’s independence, Portuguese co-operation streamlined its operations with support for East Timor’s reconstruction and development.

By the end of 2013, the co-operation strategy for East Timor was defined in the Indicative Co-operation Programme (PIC) for 2007-2010 and its subsequent extension, the latter being based on the goals expressed in the "Strategic Vision for Portuguese Co-operation" with options defined by the East Timor authorities with regard to the co-operative development activities of other donors. The sum amounted to €60m, although this value doesn’t reflect the total amount of financial aid provided by Portugal in relation to East Timor, since Portugal’s financial efforts involved annual payments above that figure (according to OECD criteria) which cannot be counted as Official Development Assistance (ODA). This situation is explained by the fact that, in addition to PIC projects, Portuguese financial aid included other multilateral actions supporting internal security in East Timor provided by Portuguese peace-keeping forces as part of UNMIT (United Nations Integrated Mission in East Timor).

On the 24th of July 2014, a new Strategic Co-operation Programme (SCP) was signed by between Portugal and East Timor for 2014-2017. The four-year programme had a budget of €42m which was distributed across the programme’s main areas of assistance.

This took into account the East Timor Development Plan 2011-2030, as well as the process of initiating the New Deal for Engagement in Fragile States currently underway throughout the country. The SCP reflects a higher level of bilateral co-operative relations between the governments of East Timor and Portugal, taking into account the current situation and their national policies, as well as the willingness expressed by the East Timor authorities to deploy a co-operation programme based on the Strategic Development Plan 2011-2030 (SDP), Strategic National Sector Plans and the New Deal for Engagement in Fragile States, the implementation of which deserves a large amount of Portuguese co-operation.

This new document is also based on the sectoral strategies of Portuguese co-operation, on the results of the Indicative Co-operation Programme for Timor-Leste 2007-2010 and the new 'Strategic Concept for Portuguese Co-operation 2014-2020. The main objective in the context of Portuguese foreign policy is based on the eradication of poverty and sustainable development within the framework of respecting human rights, democracy and the rule of law in partner countries.

It also recognises the profound changes in the international architecture of development co-operation with the emergence of new entities, new financing models and new challenges relating to global nature and interdependence, namely climate change, food safety and epidemics.

Portuguese ODA to Timor Leste increased after 2015 and has been stabilizing at an annual average of 13M€, both in net and gross terms. In 2021, there was the highest value of the last 9 years. 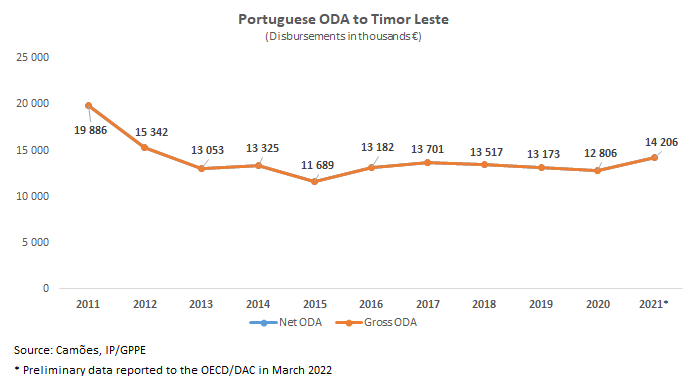 Both in gross and net terms, there is a predominant concentration in the "Social Infrastructure and Services" sector group, where "Education" and, to a lesser extent, "Government and Civil Society" sectors assume greater weight. In 2021, there was an increase in the "Health" sector due to the donation of vaccines as part of the assistance to combat the COVID-19 pandemic. 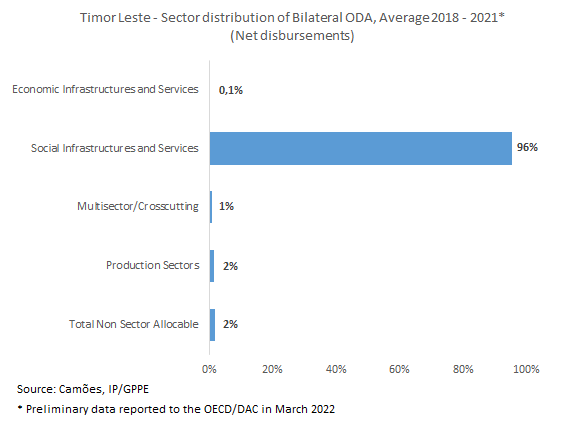