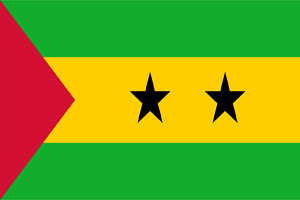 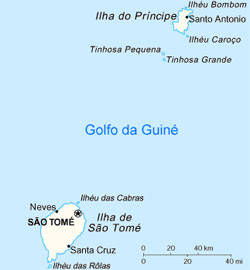 Embassy of the Democratic Republic of Sao Tomé & Principe in Lisbon

Strategic Co-operation Programme (SCP) 2016-2020. Signed by both countries on the 7th of September with a financial envelope of 57.5M€, this new programme involves a greater concentration of funds in the areas of education, health and social protection, extending to military training, police co-operation and justice.

Indicative Co-operation Programme 2012-2015. This programme covers a period of four years (2012--2015). It was signed in Lisbon on the 27th of November 2013 by the Portuguese Minister of State and Foreign Affairs, Rui Machete and by the Sao Tome & Principe Minister of Foreign Affairs, Co-operation and Communities. With a financial envelope of €43.5m, this programme is primarily focused on co-operation for good governance, participation and democracy, sustainable development and the fight against poverty.

In 2015, Portuguese net ODA to S. Tome & Principe registered a notable increase compared to the previous three years, standing at 23M€, mainly due to the concessional loan for electrical infrastructures, aimed for projects in the areas of construction and rehabilitation of electricity network. In 2016-17, ODA come again near the average values of recent years, mainly due to the final use of the concessional credit line for road and electrical infrastructures and to the decrease in costs for partner patients’ health treatments in Portugal, stabilizing in a 12M€/year average. Between 2015-19 the average net ODA stood at 14,16M€. 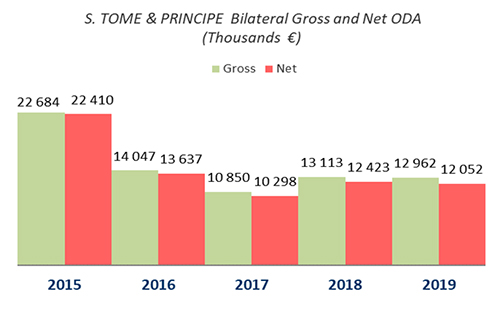 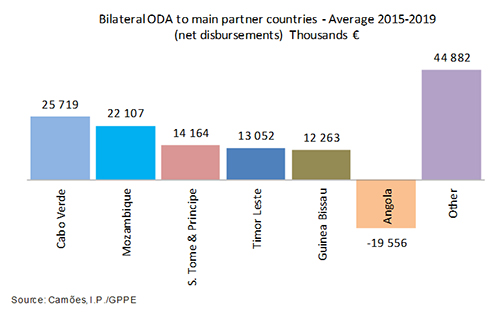 Between 2015-19, the sector group Other Infrastructures and Social Services centralized the largest share of aid (62%), through projects in the areas of Education, Health and Water and Sanitation. The group Other Infrastructures and Economic Services accounted for 23%, particularly due to the weight of the Energy sector (2015-17) in result of the concessional loan for electrical infrastructures, and the Transport sector (2018-19), owing to the Portuguese Navy Support Mission for inspection of maritime areas and training of the country's Coast Guard. In 2019, to be noted sectors Agriculture with the project for Support the Agricultural Export Lines of S. Tomé, and Fishing with the Sustainable Fishing Co-Management project in the South of S.Tomé Island. 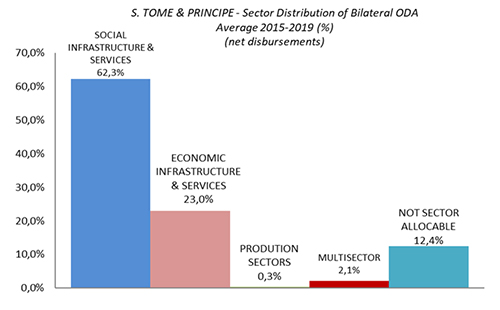