Co-operation relations between Portugal and Angola

Embassy of the Republic of Angola in Lisbon

Portuguese co-operation with Angola has been orchestrated through Indicative Co-operation Programmes (PIC) signed by both countries.

With a financial envelope of €65m, the 2007-2010 PIC benefited from an extension until 2014 for the purpose of continuing all the projects in Angola.

A new co-operation programme with Angola is currently being discussed, based on the guidelines mirrored in the new Strategic Concept of Portuguese Co-operation 2014-2010 and aligned with the priorities defined in the National Development Plan for Angola (PND 2013-17).

The aim of this programme is to continue co-operation with Angola, highlighting the comparative advantages that Portugal has, particularly in the areas of education and higher education, health, justice, social inclusion, culture and the environment.

Here follows a breakdown of the development co-operation interventions within the framework of the indicative programme from 2007 to 2010 signed with Angola, which was extended until 2013.

Line II – Sustainable Development and the Fight Against Poverty

Signed on the 10th of October 2013 in Angola, this is an addendum to the Indicative Co-operation Programme 2007-2010. The signing of this document took place within the framework of the official visit of the Angolan Secretary of State for Foreign Affairs and Co-operation. This extension to the programme will reinforce the commitment of the Portuguese government in partnership with the Angola government for the sustainable development of the Republic of Angola.

Portuguese ODA to Angola is greatly influenced by the reimbursements related to the payment of the Angolan government debt to Portugal (started in 2009) within the framework of an agreement for the concessional restructuring of Angola's public debt to the Portuguese government, signed in 2004. The repayments (average of 25M€/year) result in negative net ODA since 2009, with the exception of 2012 and 2021. In 2021, net ODA of 14 M€ was due to the suspension of repayment following the Angolan State's request for an extension of the bilateral debt moratorium until December 2021, and the donation of vaccines as part of efforts to fight the COVID-19 pandemic. 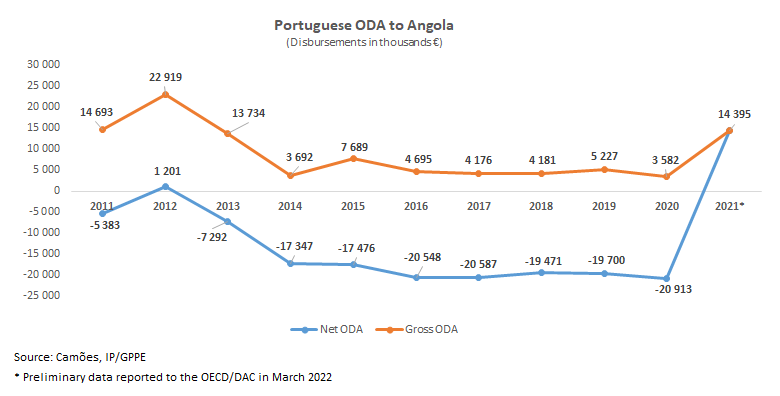 The sectoral distribution of net ODA is, thus, clearly marked by debt reimbursement figures. In 2021, there was an increase in the "Health" sector due to the donation of vaccines as part of the assistance to combat the COVID-19 pandemic. 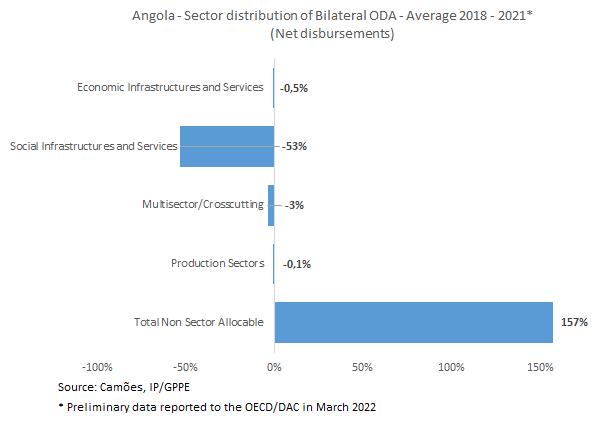