Co-operation relations between Portugal and Guinea-Bissau 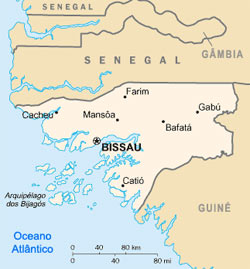 Climate: Tropical and humid with two seasons, the dry season (November to the middle of May) and the rainy season (middle of May until the end of October)

Embassy of the Republic of Guinea-Bissau in Lisbon

The co-operation strategy between Portugal and Guinea-Bissau is part of the objectives of the strategic concept of Portuguese Co-operation 2014-2020 and the options outlined by the Guinean authorities, which are part of the Terra Ranka Strategic Operational Programme 2015-2020 guidelines and objectives.

Portugal has been the largest bilateral donor to Guinea Bissau. In the period from 2009-2014, the amount of Portugal-Guinea Bissau bilateral Official Development Assistance (ODA) was the following:

It should be noted that the decrease in aid in 2012 and 2013 stems from the fact that Portugal reduced its number of co-operative interventions due to the 12th of April 2012 coup which resulted in the suspension of institutional co-operation. However, Portugal remained on the ground with projects developed by NGDOs in direct support for people in priority sectors such as education, health and rural development.

On the 6th of July 2015, a Strategic Co-operation Programme was signed by Portugal and Guinea Bissau for 2015-2020 comprising two priority areas of intervention: Plan I - governance, rule of law and human rights and Plan II - human development and global public goods.

The downward trend in aid to Guinea-Bissau until 2013 has been reversed and by 2021 ODA to that country reached its highest value in 10 years.