Clima: mild with average temperatures below 25ºC and above 20ºC across the year

Embassy of the Republic of Cabo Verde in Lisbon

Cape Verde has been the main recipient of Official Development Assistance (ODA) from Portugal. In the period from 2010-2014, the bilateral Portugal-Cabo Verde ODA represented the following values:

ODA amounts include the use of concessional credit lines/loans, the majority intended for projects in the areas of construction/restoration of infrastructure.

In terms of sectors, the Portugal-Cabo Verde bilateral ODA opted for the areas of education and health (see table below). 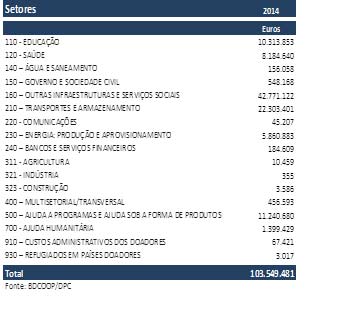 On the 19th of January 2016, a Memorandum of Understanding was signed by Portugal and Cape Verde with the objective of starting negotiations for the conclusion of a new Strategic Co-operation Programme (SCP) from 2016-2020.

Cabo Verde has been one of the main beneficiaries of Portuguese ODA since 2010. A significant part of the amounts corresponds to the use of concessional credit lines/loans for equipment and infrastructure construction and investments in the social housing and renewable energy sectors. Since 2015, the lower use of these lines, as well as the reimbursement of concessional credit lines/loans in the "Transport" sector by Cabo Verde, has led to the downward trend.